Melbourne’s love affair with coffee has been long-term, passionate, and sometimes controversial. In colonial times, street stalls on Hoddle’s Grid sold coffee to passersby. Most of the stalls were run by men.

Melbourne writer Marcus Clarke described a typical coffee stall in his newspaper columns, compiled in the pamphlet The Peripatetic Philosopher:

‘It consists of a barrow upon which is placed a large board, sometimes covered with oil cloth, and protected with an awning. On this board are set… a huge can of polished tin, with brass nozzle and spout. This tin holds about four or five gallons of coffee, which is kept hot by means of a pan of charcoal placed underneath it. By the side of the tin are ranged cups – very thick and heavy, sandwiches, greasy cakes, and a sort of plumduffs of very satisfying character…’ 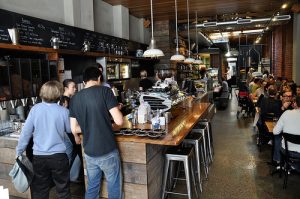 Up to the early 1870s, Melbourne’s coffee stalls could stay open all night long. Shopkeepers believed they were good for business. Restauranteurs disagreed, arguing the stalls stole their business and attracted riff raff.

By the 1880s, the heart of Melbourne’s coffee stall precinct was at the corner of Bourke and Swanston Streets. These ‘strange square boxes, with funnels sticking out of the roof’ would slowly bring the city alive at night: ‘like a fairy scene at a pantomime’.

The emergence of the temperance movement saw the emergence of coffee taverns and coffee palaces in the 1880s. Perhaps the most famous of these was the Federal Coffee Palace, which housed ‘over 500 drawing, dining, reading, sitting, smoking, billiard and bedrooms and the largest dining hall in the country’ [3]. However, the financial woes of the 1890s saw the popularity of Melbourne’s coffee palaces decline.

Twentieth century Melbourne saw the rise of cafes and coffee lounges. Cafes such as Fasolis and Café Petrushka played host to Melbourne’s bohemian crowd, attracting writers, poets, artists, and hangers on: the ‘famous, near-famous, flash-in-the-pan famous…famous to be’, and ‘garrulous never-to-be-famous’

The arrival of American troops in Australia during World War II heralded a marked increase in the quality of Melbourne’s local coffee brew – from a boiled concoction featuring chicory essence – to a more sophisticated brew using the latest coffee roasting and grinding techniques from America. 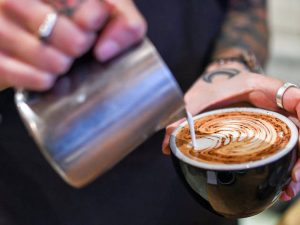 In the fifties a coffee revolution occurred. Melbourne experienced an influx of post-war migrants, and with the Italians came the espresso. Mario Brunelli’s grocery at 262 Lygon Street began serving coffee with an espresso machine. Others followed. In May 1954, Melbourne coffee pioneers the Bancrofts opened the first espresso café with a commercial coffee machine.

Espresso bars flourished in Melbourne’s city and its suburbs. They served as both a place where migrants could meet and socialise, and a breath of fresh air for Melbourne’s existing residents.

Not everyone was enamoured though. Conservatives denounced espresso bars as magnets for unsavoury characters and illegal activities.

On 14 January 1961, The Truth newspaper ran an expose on ‘espresso bar vultures’, alleging that espresso bars were being used as a cover for prostitution rackets. In the ensuing weeks the press ran stories on migrant-led vice. An interview with an ‘Espresso Bar Girl’ called ‘Jill’ was broadcast on radio and tv. Melbournians listened spellbound as ‘Jill’ outlined how she was victimised by teenage prostitution gangs in the city’s espresso bars.

Eventually, it was revealed that ‘Jill’ made up her story at the behest of police and the press. The reputation of Italian migrants had been seriously harmed, but thankfully, the damage was not permanent.

Today, Melbourne’s coffee culture is revered around Australia. The Italian community is at its heart.