The habit of coffee drinking first became popular in Europe early in the 17th century and the first coffee house was opened in Oxford at The Angel in 1650. Over the next two hundred years coffee houses flourished in cities such as London, Paris and Vienna, acting as informal meeting places where information was exchanged through conversation and print. In their heyday, the fashionable coffee houses of Europe served as well springs of gossip, political intrigue and faction. Serving coffee, tea and other refreshments, they provided newspapers and pamphlets to their clientele and also acted as meeting places for local clubs and societies. The Chapter in London was renowned for its stock of newspapers, and as a meeting place for members of the book trade, where deals were made, and contracts negotiated.

Dick’s, one of Dublin’s most famous coffee houses, was established by the bookseller and newspaper proprietor, Richard Pue, in the late 17th century. It occupied the drawing room floor of Carberry House in Dublin’s Skinner Row, the former home of the Earl of Kildare. In 1698, John Dunton, the London bookseller held auctions at the back of Dick’s and said of Richard Pue, “Dick is a witty and ingenious man, makes the best coffee in Dublin, and is very civil and obliging to all his customers; of an open and generous nature; has a peculiar knack at bantering, and will make rhymes to anything.

In 1740, Dick’s customers were described as:

Ye citizens, gentlemen, lawyers and squires,
Who summer, and winter surround our great fires,
Ye quidnuncs! who frequently come into Pue’s,
To live upon politics, coffee, and news. 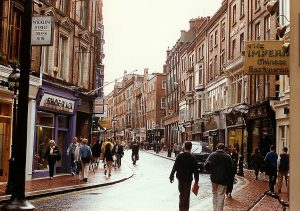 Dick’s finally closed its doors about 1780 when Carberry House was demolished.

In the first half of the 18th century many of Dublin’s coffee houses were to be found in Essex Street, near the Custom House: Dempster’s, Bacon’s, Norris’s, The Merchant’s, The Dublin, Walsh’s, and The Custom House itself. In 1730, one Dublin poet wrote of George Carterwright’s wife at The Custom House:

Her coffee’s fresh and fresh her tea,
Sweet her cream, ptizan, and whea,
Her drams, of ev’ry sort, we find
Both good and pleasant, in their kind.

The Anne coffee house, also called The Anne and Grecian, situated at Essex Bridge, was used in the first two decades of the 18th century for book auctions. During the 1730s, the committee of the Dublin Society met there to adjudicate the society’s premiums. On Custom House Quay, The Cocoa Tree coffee house was on the eastern side near the Custom House, over the bookshop of Thomas Whitehouse and St James’s coffee house was located on the upper floor of the Great House.

Merchants whose businesses revolved around the Custom House frequented two of Dublin’s busiest coffee houses: The Little Dublin and The Exchange in Crampton Court. When the Royal Exchange (now City Hall) opened in 1779, it included a coffee room on the first floor. It extended ‘from one stair-case to the other, almost the whole length of the north front, and its breadth is from the front to the dome: In point of magnificence, it is perhaps equal to any coffee-room in Great Britain: It receives its lights by the windows in the north front, and by oval lanterns in the flat of the ceiling, which is highly ornamented, and from which is suspended a grand lustre’.

Part of Cork House, built by Richard Boyle, Earl of Cork in the late 16th century (giving its name to Cork Hill) was used in the early 18th century as a coffee house by one Lucas. Lucas’s, close to Dublin Castle, became one of the most fashionable centres in Dublin and the yard behind was often used for duelling by clients needing to satisfy honour. Lucas’s flourished until 1768, when Cork House was demolished for road widening. 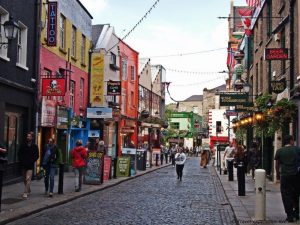 Coffee house clients had free access to the newspapers. Many establishments prided themselves on the range of papers and information slips which they held, a custom which continued into the nineteenth century. Dunton stated that in 1698 the Dublin coffee houses were served with nine newspapers weekly and the parliamentary votes every day . The Dublin Intelligence, published by Cornelius Carter and printed at the back of Dick’s coffee house in 1702, gathered its international news from packets and correspondence arriving by ship from abroad, and news taken from London and Dublin newspapers. In addition the printer was ‘supplyed with the Leyden and Harlem Gazettes in English, and all other Prints of Consequence.’ Carter claimed that: ‘At the Printing-House at the Back of Dick’s coffee-house, and at the Post Office coffee-house, will be continually printed the best and freshest News both Foreign and Domestick; and all considerable Occurrences that happen in any Harbour, Port, or Place in this Kingdom; which may certainly be depended upon as truth, they having settled a Correspondence at the Post-Office.’

In 1702 Francis Dickson informed readers of The Dublin Intelligence, printed at his Oxmantown coffee house in Church Street, that its foreign news was ‘Extracted out of the Paris, Harlem [and] Antwerp Gazettes‘. In May 1706, Dickson moved from Church Street to Winetavern Street, renaming his premises, The Queen Anne’s Head. At its new location it held the Paris and London Gazettes, Leyden Gazette and Slip, the Paris and Hague Lettres à la main, Daily Courant, Post-man, Flying Post, Post-script and Manuscripts . Lloyd’s coffee house had ‘the greatest Variety of Foreign and Domestick News’ . Overseas gazettes regularly supplied copy to the nearby newspaper printing houses from whence it was made available to the coffee house clientele.

In 1736, the Dublin Daily Advertiser was sent ‘gratis to all the most noted Inns, Taverns and Coffee-houses throughout the Kingdom, and to the chief Ale-houses of the City of Dublin’ . By 1777, Finn’s Leinster Journal was being distributed by Catharine Finn of Kilkenny to ‘the London, Chapter and Peele’s Coffee-houses in London; the Grove and Parade Coffee-houses in Bath; the Merchants Coffee-house in Cork and Nixon’s Coffee-house in Waterford’. Back issues of newspapers also seem to have been kept for perusal by customers.

The early nineteenth century marked the beginning of the end for coffee houses as informal news exchanges and it was not until the 1970s, over a century later, that the fashion for coffee drinking in specialised cafes and coffee shops was re-established.